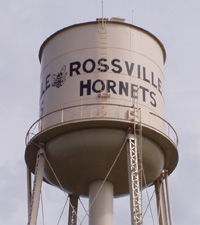 The Town of Rossville employees annually flush hydrants to remove built up sediments in the lines.  It will be posted when this will occur.  Please refrain from washing your white clothes on the designated days due to possible water discoloration.  Should your water become discolored during this time, please allow your cold water faucets to run until clear water appears to flush your lines.  You may also experience low water pressure during this time period.

Available to customers when usage is principally for irrigation purposes and the majority of such usages is between the hours of 11:00 p.m. and 6 a.m.  Users availing themselves to this rate are subject to curtailment of supply at any time at the request of the Town Council or their appointed agent.

The Town of Rossville began construction on a water distribution system in 1938.  By the end of 1939, the water mains were in place and work was completed on the pump house.  A 250 gpm (gallon per minute) pump was installed in the pump house.  Work was also completed on the 50,000 gallon water tower.  In 1962, an additional 200 gpm well was placed in Morris Gray’s cornfield.

In 1984, construction was begun on a 150,000 gallon water tower on W. Ramey and another 250 gpm well was put into service in the Town Park.  This would accommodate the additional housing being added to the system.  A twelve inch main also links both towers.

A water filter was added to the system in 1992 to improve the quality of the water.

We're not around right now. But you can send us an email and we'll get back to you, asap.